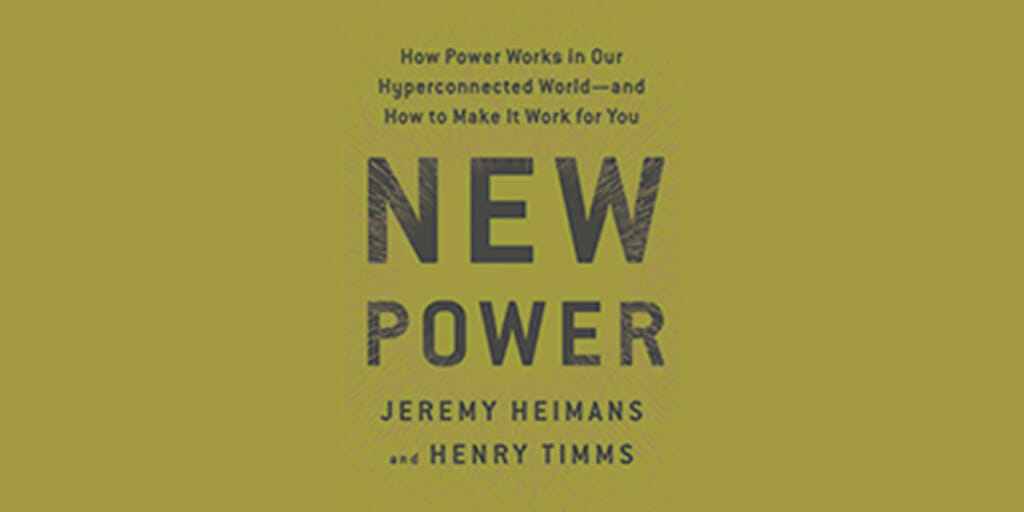 How to Win Power and Influence in Our Chaotic, Connected Age

How did startups and grassroots activists get the upper hand over gigantic corporations and establishment politicians? Whether for good or ill, the big winners of the past decade – from market disruptors like Uber and Airbnb to political insurgents like Barack Obama and Donald Trump – have been those who harness our growing appetite to...Danny Stern   |   November 1st, 2018

How did startups and grassroots activists get the upper hand over gigantic corporations and establishment politicians? Whether for good or ill, the big winners of the past decade – from market disruptors like Uber and Airbnb to political insurgents like Barack Obama and Donald Trump – have been those who harness our growing appetite to participate.

Jeremy Heimans, co-founder and CEO of the global movement-building agency Purpose, and Henry Timms, CEO of the storied New York community institution 92nd Street Y, are the foremost experts in what they call “new power,” the ability of companies and individuals to harness crowd energy by giving voice to the public via digital platforms. Through highly engaging and entertaining keynotes, Heimans and Timms present the definitive guide to understanding, grasping and utilizing the awesome forces of digital engagement to generate energy and drive action.

New power is a method and mindset that can help organizations and companies around the world build genuine movements and communities around their brands, drive business model innovation, and provide a new lens on management, employee engagement and leadership for a connected, highly participatory world.

The new power phenomenon can explain why Nike’s market cap rose by $6bn after it championed Colin Kaepernick, and how LEGO saved itself from the brink of bankruptcy by embracing the power of the crowd. And the concept is fast becoming a business phenomenon: first published as the “Big Idea” in Harvard Business Review and as a popular TED talk, the new power method and mindset is now being embraced by some of the world’s top CEOs, activists, educators, health leaders and politicians.

“A useful lens to use when thinking about how business has changed, how to spread ideas or start a movement, or create change. This book challenges all of us to think about the values we hold and how we can all be part of building a more open, equitable, and participatory world.”

Heimans and Timms have worked and excelled in both business and the social sector to build movements founded on engagement. In their best-selling book, “New Power: How Power Works in Our Hyperconnected World – and How to Make It Work for You” (Doubleday, April 2018), the two activists, entrepreneurs and thought leaders vividly describe this enormous shift in the nature of power between institutions (i.e., governments, businesses and media) and consumers. Called “the best window I’ve seen into this new world” by David Brooks of The New York Times, “New Power” documents how leadership is no longer simply a matter of consolidating authority within organizations, with leaders amassing power like a currency. Today, a new form of power is ascendant, one that works more like a current – a force that every leader must learn how to harness, but that no one leader or company can hoard or wholly control. “The future,” say Heimans and Timms, “will be won by those who can spread their ideas better, faster and more durably.” The book is now a finalist for the 2018 Financial Times and McKinsey Business Book of the Year Award.

“The surest sign that I’ve encountered a big idea isn’t what that idea does to my brain. It’s what it does to my eyes.  When an idea is sufficiently compelling, it changes the very way I see. That’s what happened to me when I read New Power.”

In their presentations, Heimans and Timms blend inspiration and practical advice. They argue that the best strategy for organizations is to combine elements of old and new power to make the evolutionary leap into the new world. This message is especially relevant to institutions that grapple with the decline of their traditional authority. “New Power” clarifies these social forces and equips you with the perspectives and tools needed to capitalize on new power’s transformational potential.

“You couldn’t wish for two better people to write this explanation and exploration of new power than Henry Timms and Jeremy Heimans. It is the detail in this book that really excites … its optimism and practical advice. And, unexpectedly, it is funny. I’d encourage you to participate in purchasing.”

Jeremy Heimans and Henry Timms are available for keynote addresses, speeches, panels, conference talks, and advisory/consulting services through the exclusive representation of Stern Speakers, a division of Stern Strategy Group®.